For a variety of favourable logistical reasons, we found ourselves on a flight to Gothenburg the other week, heading for a week of treasure-hunting.

The best time for hunting of course is summer, with the long days and plenty of barn sales (or 'loppis', as the Swedes refer to them) open for business.

From our base near Stenungsund, on the beautiful Bohuslän coast of Sweden, and despite it being the wrong end of summer (i.e. autumn!), we managed to plot a packed agenda of treasure-hunting. We revisited some of our favourite haunts, and found some fantastic new ones.


Roaming the countryside definitely provided good hunting ground for treasure, but inspiration in the form of colours, design and graphics, also came in from a bit of sightseeing - both in Gothenburg and indeed the local supermarket...

Frenzied packing and organizing ensued - some of the items are already at LASSCO Ropewalk for sale (a vintage Scandinavian globe, a retro Danish chair), others are being prepared for sale at our Cornish workshop, and some of the larger items will be making their appearance on the shop floor next year.

Sign up to our newsletter to keep track of when these Scandinavian treasures are due to appear!

After a busy summer, we're now happily settled into our new retail space at LASSCO Ropewalk. Our new newsletter is up and running (sign up here - September's newsletter out soon!), and we're loving the challenge of sourcing impressive, crowd-pulling items of stock to fill the generous window spaces along Maltby Street that we have at our disposal.

Images with Impact
As stock has sold, we've dressed and re-dressed the windows and a further challenge has presented itself. We wanted to get a decent 'window shot' to show off LASSCO Ropewalk at it's best. However, not even Jeffrey the Zebra can battle the reflections of parked cars and general street paraphernalia... 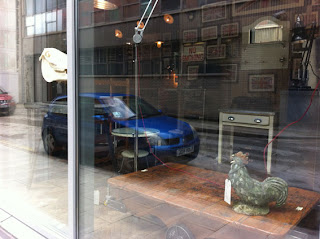 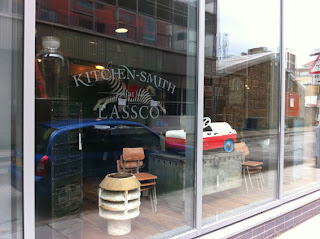 In order to get an 'image with impact' to show off LASSCO's Maltby Street windows, we came to the conclusion that there was only one viable option - the technically-challenging, night-time photoshoot. Lighting the window spaces from inside whilst photographing from a dark street might just provide the photograph we were after. And there was only one steady-handed man for the job - top photographer and all-round Good Egg, Stefan Lorett.

Under the Cover of Darkness
It was a good dry evening and after a sustaining supper courtesy of Mr Lorett, our intrepid team headed up to LASSCO Ropewalk. Armed with his arsenal of top-notch camera equipments, lighting, and a good few miles of cables, Stefan proceeded to (photographically-speaking) 'case the joint'. Lights were positioned, test shots taken, lights repositioned, stock moved to reflect light in beneficial ways, shiny industrial cabinets cursed, lights repositioned again, bright orange security lights cursed, and the services of a ladder requested. 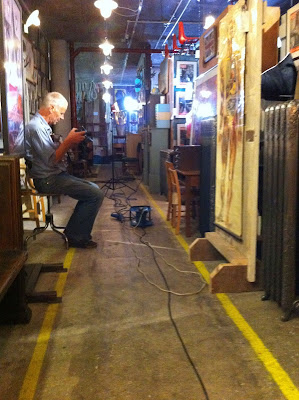 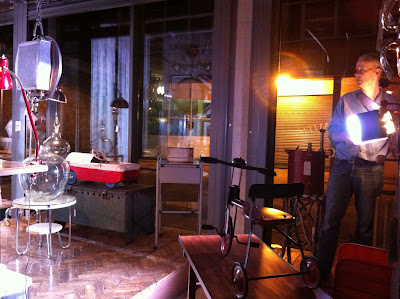 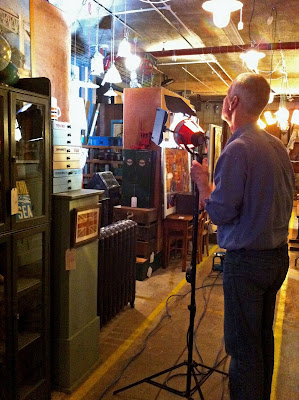 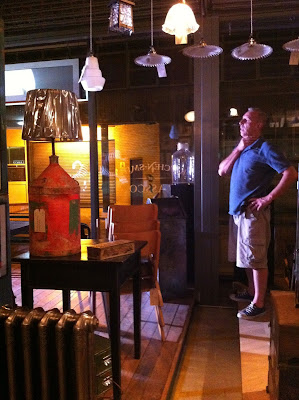 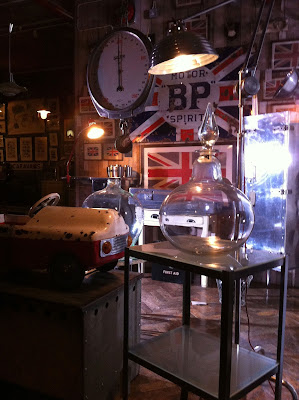 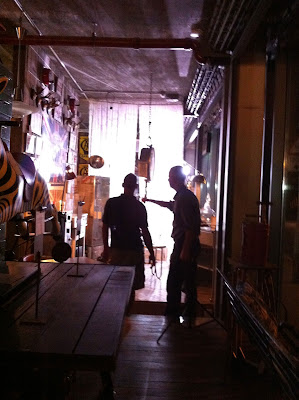 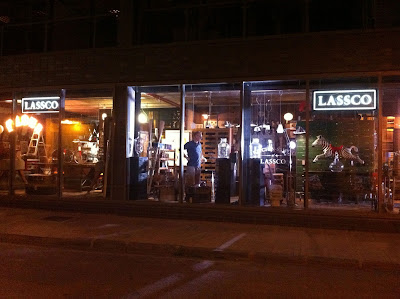 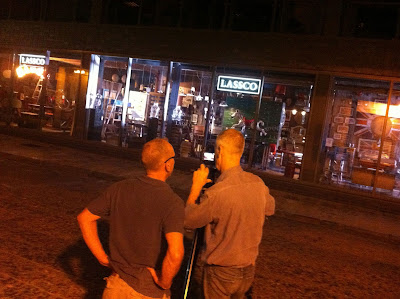 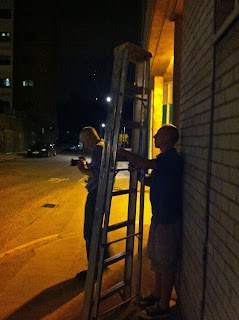 It's Raining Men
The lighting was right, the stock had been subject to a mild reshuffle, the shot was lined up, the exposure time was determined, and just on cue, the rain began falling gently. A bit of lateral thinking, and shelter was duly provided in the form of a delightful parasol (as seen in August's 'Homes and Antiques' magazine).

After over two hours of careful preparation, the photograph was taken. Lights cooled, kit was packed, cables were reeled, Stefan regaled us with stories of his youth...

In the following days, Stefan carefully applied his top notch post-production skills to the photograph, balancing the lighting, knocking back certain details and enhancing others. The result is a fabulous, pin-sharp photograph which will be appearing on a LASSCO postcard very soon...


Posted by Marc Kitchen-Smith at Monday, September 09, 2013 No comments:

Jeffrey's Journey: From Donkey to Delightful

Prologue
It's a typically wet, Cornish, autumnal afternoon. An intrepid treasure hunter (the hero of our tale) scans an industrial unit at a secret location in the Tamar Valley. It's the resting place for stuff that no-one wants anymore. In other words, the perfect hunting ground for our hero. 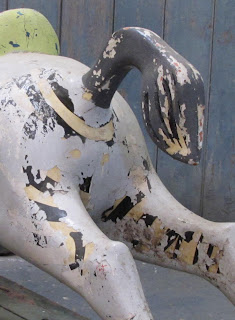 The clue is in the bottom

Introducing Jeffrey the Zebra
So the donkey was delivered back to our hero's home in Liskeard, Cornwall, where he adorned the living room for so long that he was adopted as part of the family, and was christened 'Jeffrey'.

Jeffrey dates from the late '50s/early '60s and is made of fibreglass. He was originally attached to floor-mounted machinery so that he could give gentle rides to children on their seaside holidays. At some point in his career, perhaps when his stripes became a little shabby and tired, some bright spark decided to reinvent him as a donkey (a lot easier than repainting his stripes - 'I can understand why!' our hero exclaims). A simple coat of grey paint, and the transformation was complete.

Then about ten years ago he was retired from service, usurped in children's affections by the likes of Postman Pat and Thomas the Tank Engine. So he made what he thought was his final journey to a local refuse tip here in Cornwall, destined for landfill until he was spotted by a certain someone with a discerning eye...

With a huge window space at LASSCO Ropewalk to fill, the time had clearly come for Jeffrey to be take centre stage.

The Restoration Job
After some preliminary 'zebra stripe patterning' research, and construction of the obligatory mood-board, work began on restoring Jeffrey to his former gloriously striped self. He was removed from his defunct mechanical base, and remounted onto a specially commissioned stand. 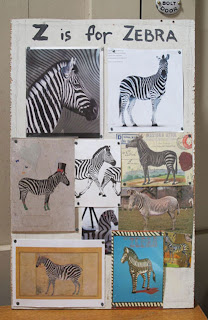 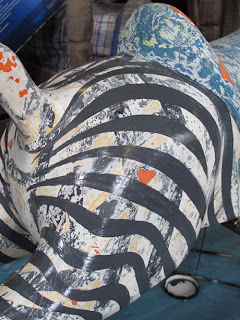 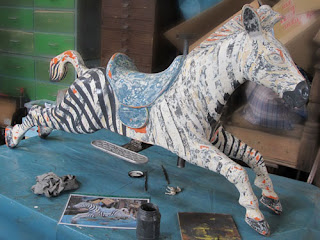 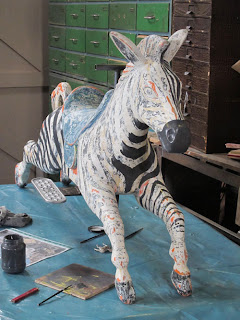 Our plucky hero wasn't phased by the challenging working conditions. Neither was Jeffrey. 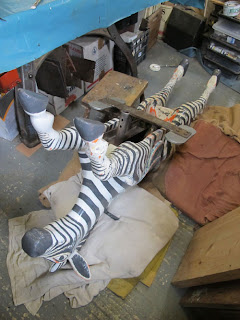 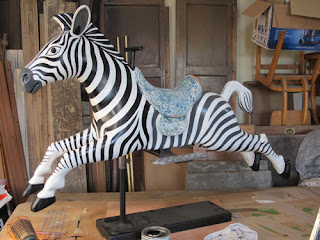 Step Four: Stand back and admire 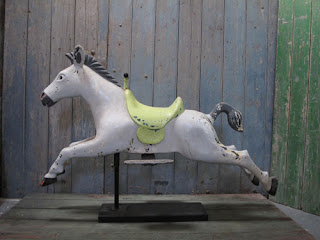 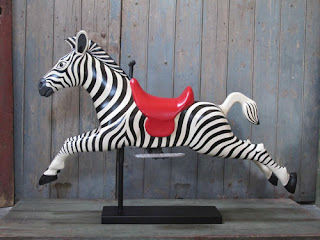 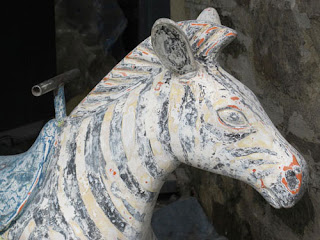 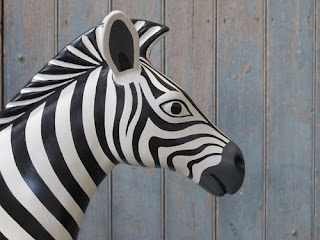 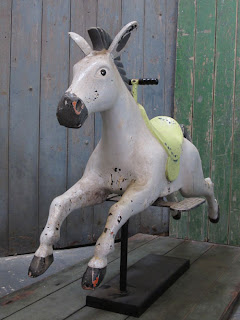 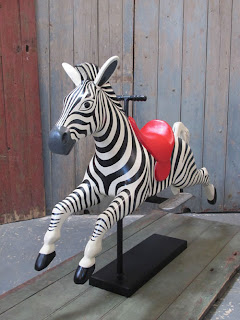 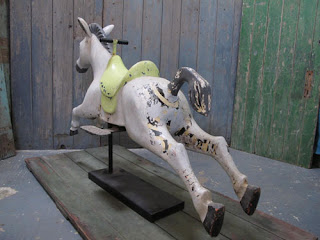 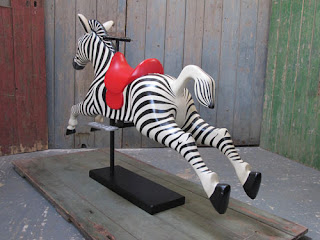 But how long can the great buying public resist his charms? 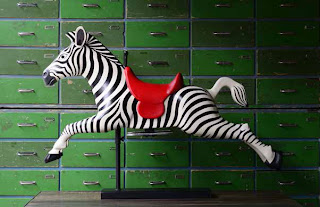 'Come and see me some time.'

Posted by Marc Kitchen-Smith at Thursday, May 16, 2013 No comments:

Marc Kitchen-Smith
We locate, repair, renovate and restore artefacts of the past to give them a new lease of life and purpose. We champion the enduring quality of good design, classic style, and good craftsmanship whether it be a piece of 1930s office furniture or a quirky piece of taxidermy. A creative approach and a discerning eye creates an ever-expanding stock of goodies all available for sale....